Sushi, the latest trend on the dining table: but, does it really help you sleep better? 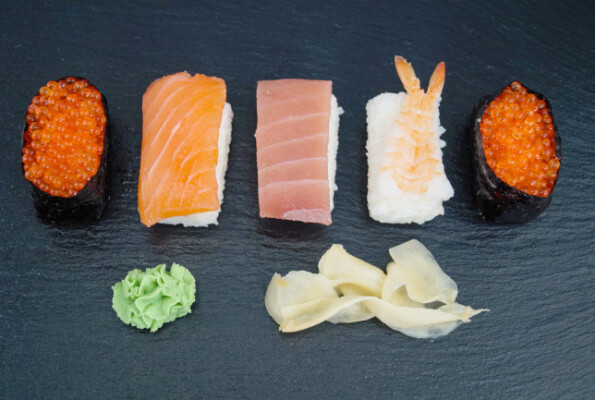 In Italy, Sushi and Sashimi are the most popular dishes of Japanese cuisine.
Sushi consists of a specific variety of rice (Uruchimai) cooked in rice vinegar and Japanese sake combined with slices of fish and seaweed.
Sashimi instead is simply raw fish: its peculiarity lies in the way it is cut, i.e. in small rectangular slices. Sashimi is usually dipped in soy sauce to add saltiness and flavor to its taste.
Sushi can be prepared using any variety of fish, provided it has been first properly refrigerated, except for freshwater fish, which is usually eaten cooked.
The most popular Sushi is Toro or Otoro, a particular kind of tuna slice.

Is Sushi good for your health?

Sushi and sashimi definitely are, without a doubt. Sushi is made of rice, seaweed, and fish, whereas sashimi represents the purity of raw fish.
Raw fish helps to keep your arteries healthy and ensures proper functioning of the central nervous system. Fish, especially bluefish, is rich in Omega 3 fatty acids, which help fight the production of free radicals and the formation of cholesterol.
Eating sushi or sashimi means choosing a light, healthy, and quickly digestible meal, and is the perfect choice for dinner before going to bed.

Sushi causes drowsiness precisely because of its ingredients, fish, and white rice. White rice has a very high glycemic index, which means that it favors sleep, although not instantly, while fish, which is rich in Omega 3 and vitamin D, is conducive to a better quality of sleep.
A Norwegian study published in the Journal of Clinical Sleep Medicine has found conclusive evidence to that end, as it states: “a person who eats fish three times a week will sleep easier and better than one who doesn’t”.
It would be a pity though, to have a great Sushi or sashimi meal…and then sleep on a poor-quality mattress. But that’s not a problem! In fact, just like we have sushi for the dining table, we have Magniflex for the bedroom!

Ease Your Mind and Body with Nature
Friday 13 May 2016