Sleep on Mars: How are we going to sleep on the red planet? 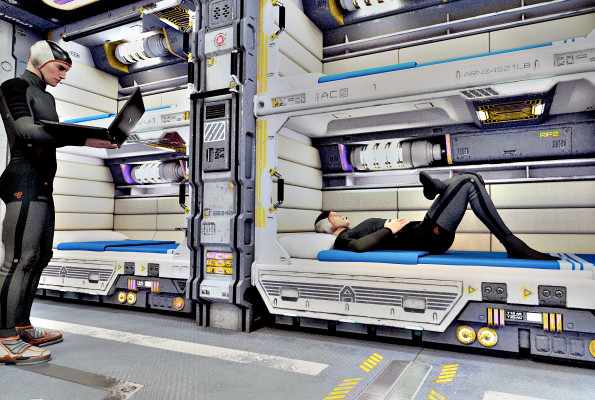 We’re going to feel light the very first time we set our foot on planet Mars. In fact, the force of gravity on the red planet is lower than the one on earth (on Mars, a person’s weight decreases by 62%). Also, we will definitely feel tired, since the journey to get there is several millions of kilometers away. But will we find it easy to sleep there?

Let’s take a step back:

Sleeping on our trip to Mars

Not dying of boredom, not consuming too many valuable resources, not producing too much waste, and staying physically and mentally fit. These are the main challenges we’ll have to face when planning a space mission to Mars. The problem of maintaining our mental and physical balance has been the subject of extensive research in Russia, as part of the project Mars 500. The solution to all other problems we might face, instead, is quite simple: we’ll have to sleep through the trip!

Hibernating on our way to Mars

It would seem like science fiction, but the possibility of having astronauts hibernate during their trip to Mars is being studied and you might be surprised to learn that scientists have already made a huge progress in that direction. If the results of these studies are confirmed, space travelers to Mars will enter a state similar to hibernation, with their basic bodily functions reduced to a bare minimum and with feeding administered intravenously. The technique may allow people to take “naps” of two to even four weeks, with an astronaut always on duty to monitor things in case of an emergency.

It’s not clear yet if cryogenic sleep will weaken the body’s immune system, which is already put to the test when the mission is only 10 days long. A recently conducted study, in fact, shows that latent viruses are more commonly re-awakened in astronauts. A positive aspect, though, is that hibernating in cells, will ensure that they are screened from cosmic radiations.

And who knows… maybe Magniflex will invent a special mattress, a “Mars-flex” designed specifically for you to sleep in hyperspace!

Goldenrod: properties and benefits of the “gold” plant
Friday 24 January 2020