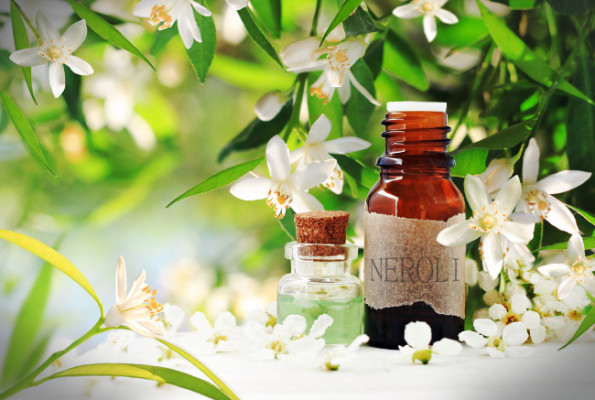 Its name dates back to the 15th century, was coined by Marie Anne de La Trémoille, and is linked to the village of Nerola, where “Annemarie” lived with Count Orsini. It is an essence with a sweet and rich fragrance obtained from the bitter orange blossom (Seville orange). Rediscovered by contemporary cosmetics, the essence of Neroli was used as a perfume already in the Middle Ages and is still used in the kitchen.

Very pleasant to smell, in the form of essential oil, Neroli is a valuable aid that induces relaxation. Thanks to linalool, nerol and geraniol, this essence has a calming effect on the nervous system. In the herbal tradition it is indicated to fight stress, increase mental clarity and is considered a valuable aid for women during the menstrual cycle.

The orange blossoms are white, for which reason they were used to decorate the wedding crown of young brides; together with this symbolic value, the orange blossoms, releasing all their essence, helped to overcome the fear of the first night… In short, Neroli can be both a valuable personal help and an excellent “aphrodisiac” for couples.

As an air freshener, it is suitable for the bedroom, both because of its seductive aroma and its calming and relaxing effects. One last interesting fact: Neroli is extracted from the flowers but also from the fruit and is a treasure chest of properties. The bitter orange adds to the virtues of flowers also digestive and slimming effects (due to the fact that it contains synephrine, which stimulates basic metabolism and thermogenesis).