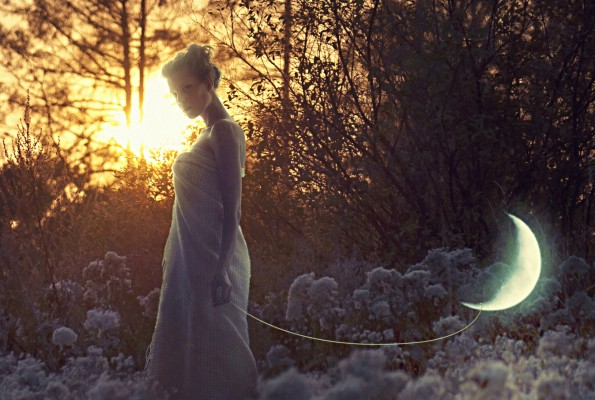 “Moonstruck” is the title of a famous film from 1987.  The main character, played by Cher, falls victim to a full Moon when she is influenced by the Earths cosmic powers.  Ever since the dawn of humanity, man has always thought that the Moon and the female gender have shared an unbreakable bond.

The bond between Moon and Woman throughout history

Whether it was the Babylonian Sin, the Egyptian Hathor or the Greek Artemis who helped Leto give birth to her brother Apollo, the Earth’’s cosmic force has always been recognized as having the power to influence biological cycles.  This force has been known to influence cycles related to reproduction, even among animals and vegetables.

The effects of the Moon on the Earth

We know that the Moon influences our planet in two ways:  The first is through light, which influences the behavior of certain plant species, especially those that reproduce. The second, and most noticeable, is through gravity and its effect on the tides.

The lunar cycle and the menstrual cycle

How did the bond with woman begin?  One considered possibility is due to the fact that a lunar cycle lasts an average of 28 days, just as long as the menstrual cycle, hence the possible correlation between moon phases and births.  It is a common belief that the frequency of these births is greater during a Crescent Moon as opposed to a Waning Moon.  According to some theorists, the full Moon may even be able to induce labor. The Earth’s orbit affects the tides and therefore the amniotic fluid, which is apparently pushed outwards during birth. There is also a dissertation on the topic, which concludes that the lunar cycles can have an influence on the gender of the newborn baby (male if conceived during a Crescent Moon and female if during a Waning Moon).
In the 1950s, people like Eugen Jonas, named the woman’s fertility days according to the phases of the Moon.

The Moon and the pineal gland

Other theories link the lunar phases to the work of the epiphysis or the pineal gland found in the brain.  The pineal gland controls the onset of reproductive maturity and produces melatonin, which is essential to regulate a consistent sleep-wake cycle.

Measuring time according to the Moon’s phases

Popular beliefs aside, the Moon’s phases have helped man to calculate dates since the beginning of time. The ancient Indians, for example have regarded the duration of a pregnancy as 10 moons.  Also, even to this day, Muslims pinpoint the ninth lunar month with the celebration of Ramadan.

True or false, the charm of a full Moon that brightens the night sky or the beauty of a kiss under a Crescent Moon remains intact?  To put it as Shakespeare did, “It is the very error of the Moon, She comes more nearer earth than she was wont and makes men mad”.

The Teddy Bear, our faithful companion in dreamland
Thursday 17 November 2016