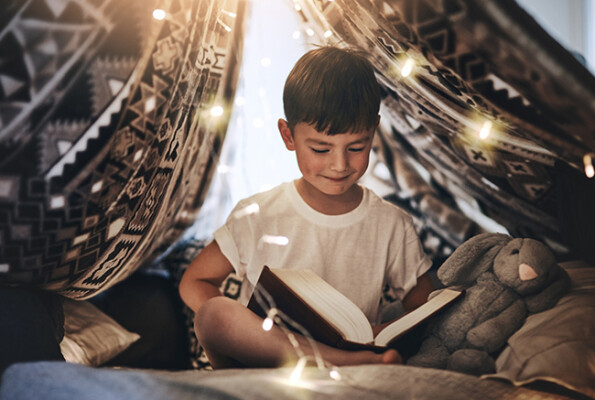 Magniflex is an example of both Italian and Tuscan excellence. The company’s ties to the Tuscan region and the bond with its place of origin are a characteristic evoked time and time again, with a special focus on its history and value. The company’s main goal is to provide quality sleep products to everyone, something which it wants to guarantee to all its customers, from adults to children, with whom it had the idea of sharing a series of Tuscan fables that will help their parents tuck them into bed. Fables are for everyone, not just Tuscans!

Tuscany is a land that offers several sources of inspiration for fables and legends with themes that can range from religious to heroic or superstitious and which may be fictional or based on true stories passed down over centuries. Where reason is unable to provide a logical explanation to the events narrated, imagination steps in!

That’s how the story of the “Innamorata” Beach on the Island of Elba originated. Here, on July 14th locals commemorate the tormented love between Maria and Lorenzo strongly opposed by their families, thus forcing them to meet secretively on the beach. In 1534, when Elba fell prey to pirates, Lorenzo was taken captive before the eyes of his loved one, who out of desperation dived into the sea to never return. A love story with a tragic ending in true Shakespearean style. Another romantic story is the one of the Beauty adorned with seven veils, a poor young girl who was a witch’s daughter destined to be given in marriage to a prince who to be with her will have to face a series of challenges and first break her mother’s evil spell.

More closely related to the traditions of the Tuscan hinterland is the story of Buffardello, a naughty elf said to inhabit the forests of Garfagnana. Known also by the name of Linchetto, this elf enjoys disturbing children while they are asleep and is the culprit for those mornings when we wake up with plenty of knots in our hair. This elf loves tying knots even on horse manes and animal fur and especially on the long hair of damsels, who wake up to find their hair braided like only the finest hairdressers know how.

Tuscan legends also draw much inspiration from Boccaccio’s renowned Decameron. The story of Chichibio and the crane is narrated as an example of gluttony and ingenuity. One one evening Chichibio, the chef of a powerful Florentine family, prepares nothing but a single crane leg for his master, after having gifted the other leg to the woman he loves. When questioned about the missing leg, Chichibio answers that cranes only have one, hence their customary stance. As confirmation, Chichibio takes his master to a nearby lake where cranes are known to gather, all resting on just one leg. Unfortunately, though, Currando, one of the servants, makes a lot of noise running and the birds fly away in fear, thereby revealing their second leg. The story’s wit lies in Chichibio’s reaction, who justifies his claim by alleging that had his master shouted the night before, the second leg would have appeared on his dish, thus solving the mystery.

Another well-known legend in Lucchesia revolves around the strange shape of Ponte del Diavolo or Devil’s Bridge. It is believed that the site manager hired to build the connecting bridge between the two banks of the Serchio river asked the Devil for help completing the construction in exchange for the life of the first person who would cross the bridge. Quite cleverly, on the day of the bridge’s inauguration, the site manager decided to sacrifice a dog, having it cross the bridge. The story goes that God Himself, having unmasked the site manager’s clever trick, decided to step in to save the animal’s life by lifting the central arch of the bridge, so that the Devil would have failed in the attempt to seize the dog and drag it away down the river. As a warning of divine intervention, the bridge kept this distinctive shape, which makes it instantly recognizable.

These are just a few traditional Tuscan fables that can be told to children before bedtime and for their parents’ amusement as well.

Spring and a trip to Tuscany
Wednesday 14 April 2021