HOW TO ORGANIZE THE PERFECT PAJAMA PARTY 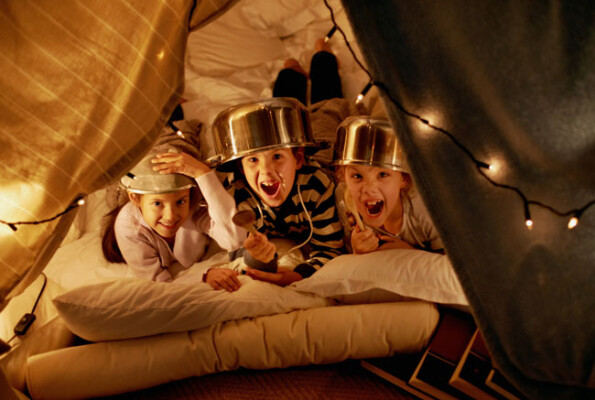 What is a Pajama Party?

The origin of the term “Pajama Party” is most likely found in a movie from 1964 entitled “Pajama party”, directed by Don Weis and starring Tommy Kirk and Annette Funicello.
Pajama Parties as we know them today became popular among adolescents in North America in the 1970s and Italy in the 1980s. A Pajama Party consists of a small party at the end of which a movie or TV series is watched (the famous marathons). At Pajama Parties, the challenge is to stay awake through the night, always under an adult’s supervision. Friends are welcomed to the den of one’s bedroom and people eat popcorn and finger-foods and in other words…you party all night long, disrupting the balance between wake and sleep. Pajama Parties are often the first introduction to the world of roleplaying games.

How do you organize the perfect Pajama Party?

Everything must be perfect on the night of the Pajama Party.
Bearing that in mind, mistaking the date is not a good start…the best days – quite obviously – are those immediately preceding the weekend or holidays, because you hardly sleep anything at all at a Pajama Party!

The home turns into a valuable asset: if you own a swimming pool, the ideal time of the year is summer, so that your guests can take a dive into the water at midnight, and if you have a yard, you may want to set up the bed inside a tent. In other words, it’s a good idea to have every detail of the party taken care of before you close yourself in the bedroom. Another thing about the home…never invite too many people, as overcrowding (even once the Covid emergency will be over) is never a factor for providing entertainment. Even if you ask your guests to bring pillows and sleeping bags along, it’s almost guaranteed someone will end up forgetting an item or two, which is why extra bedsheets and pillows should always be available.

Another aspect is the food, which should be tasty but not too heavy, considering that at a Pajama Party, you spend a lot of time munching on snacks…

To make things more vibrant, you can also opt for a theme-based Pajama Party. Let your creativity run wild in choosing the theme for your party: from a simple color to an activity like painting or videogames, make-up art, comic strips, etc.

Well then…are you ready for a Pajama Party?