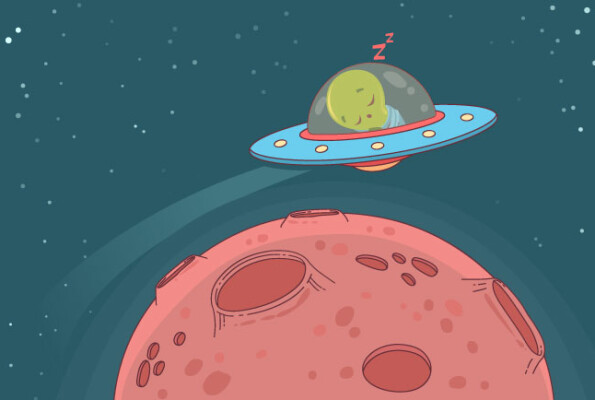 It’s an absolute certainty by now: in a few years we will conquer Mars and civilians, not just astronauts, will be able to visit the red planet. So-called “space tourism”, in fact, is the new business frontier, with its frontrunners being the hyperbolic businesses of eccentric tycoons but also the International Space Station (ISS), which could accommodate its tourist clients at the price of 35,000 USD per night (the total price of the trip would be around 58,000,000 dollar bills).

If sleeping on a station orbiting in space may not be the most comfortable solution, partly because the cramped spaces and zero gravity may cause a few problems, at least on the first nights, falling asleep on Mars would prove even more…complicated.

Well then, if anyone is an expert about sleeping in space – we hope our fellow astronauts won’t frown at us for saying this – it’s definitely…aliens! Some theories out there are rather odd, like the aestivation hypothesis, which, in essence, claims that advanced alien civilizations base their entire existence on precise and complex calculations, which they are capable of performing according to mathematical equations we wouldn’t be able to even imagine, but which due to excessive heat are presently unable to take advantage of all the energy necessary for their computations and therefore, while waiting for a more favorable climate, are in so-called “aestivation”, a sort of hibernation. Aliens would be intentionally aestivating while waiting for the best time to use all the energy their existence requires, a time that is rationally, logically plausible. According to this theory, therefore, aliens do indeed exist, and apparently have evolved to heights unimaginable for mankind and would have decided to hibernate until the right moment when making use of the energy of the cosmos to fuel their technologies will prove convenient.

However, should humans bring their plans for cosmic travel to fruition, our solar system would already pose its own set of challenges, as we would find ourselves having to figure out our ideal sleep/wake regimen and adjusting to the different number of hours in a day on the planets we’d decide to colonize. If here on planet Earth, 24 hours are enough and on Mars a day is only 39 minutes longer, how would we adapt on Uranus, where the time between one dawn and the next is 84 earth years? We wouldn’t have it much easier on Venus or Mercury, where we’d go to bed and then wake up after 116 and 176 days (or better: the median between 116 and 176, calculating an equal subdivision between the time we are awake and the time we spend sleeping). Or what will we say about our interrupted sleep on Jupiter and Saturn, places where the rooster crows only after 10 hours (the first time) and a little less than 11 hours (the second)?

Or what about Neptune? People who like to sleep in late would have a hard time adapting on this planet, where a day is 16 hours and 6 minutes long.

That leaves us with Pluto, which, however, is no longer considered a planet, since scientists now agree in classifying it as a “dwarf” celestial body excluded from the list of planets that form our solar system. One which many of us, though, would probably pick for a holiday in space, seeing that a day on Pluto, in fact, lasts 6 earth days (and 8 hours), perfect for catching up on the number of hours of sleep we normally lose here on Earth. Perhaps in the company of…an aestivating alien!