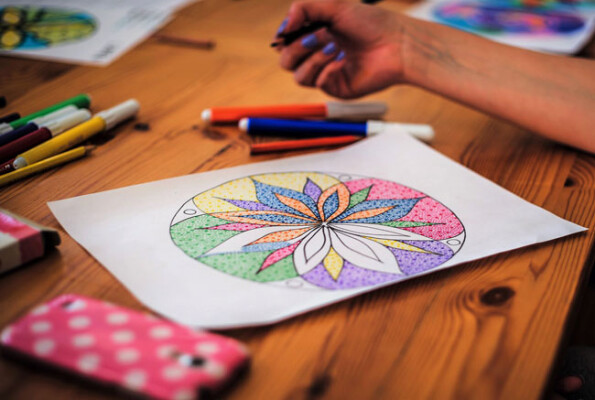 The Mandala and its origins

Mandala in Sanskrit means “circle” or “discoid object”.
It’s a geometric design based on a form having circular symmetry that is traditionally rich of symbolic meaning. It is believed that Mandalas represent the different aspects of the universe, which is why they are used as meditational and spiritual tools, especially in China, Japan, and Tibet.

The multiple meanings of Mandalas

The mandala represents the universe, but it can also be seen if one turns his/her sight inward to capture personal messages and meanings.
In Hinduism and Buddhism, it is believed that by stepping inside the geometry of the Mandala and moving towards its center, a person is guided through the cosmic process of transformation of the universe, from a state of suffering to one of joy and happiness.
Once completed, the Mandala is then destroyed because according to Buddhist philosophy, it symbolizes the transience and fleetingness of life.

The Mandala arrives to the West

The first person to talk about mandalas and their importance in personal growth processes was Carl Gustav Jung, who noticed shapes in his graphic representations that could be traced back to mandalas: “My mandalas were cryptograms concerning the state of the Self which was presented to me anew each day. In them I saw the self – that is, my whole being – actively at work. To be sure, at first, I could only dimly understand them; but they seemed to be highly significant, and I guarded them like precious pearls. I had a distinct feeling that they were something central, and in time I acquired through them a living conception of the self. The self, I thought, was like the monad which I am, and which is my world”.

Coloring a mandala allows a person to temporarily stop the mind from stressing over things and calms the anxiety caused by everyday thoughts. Coloring one’s own mandala gives the impression that you are dreaming with open eyes; a dream in which to find solace from the mundane, a moment spent with oneself suspended in time and space.
In this situation, we can seek and remake contact with the depth of our feelings, pursuing a path of introspection.
There is no single handbook for coloring mandalas, but we can recommend some helpful practices:
• choose the mandala allowing your intuition to guide you, the one you like is the right one for you 😉
• find a quiet, peaceful place free from distractions
• close your eyes and take a deep breath
• allow your creative side to express itself
• “surrender” yourself to color
• once you have completed the mandala, take a moment to appreciate the beauty of your very own masterpiece.
Everything will appear to be more in harmony. Even life with your neighbors 😉

Is Jet Lag different when travelling from East to West?
Friday 25 November 2016