Children and New Year’s Eve: instructions for use 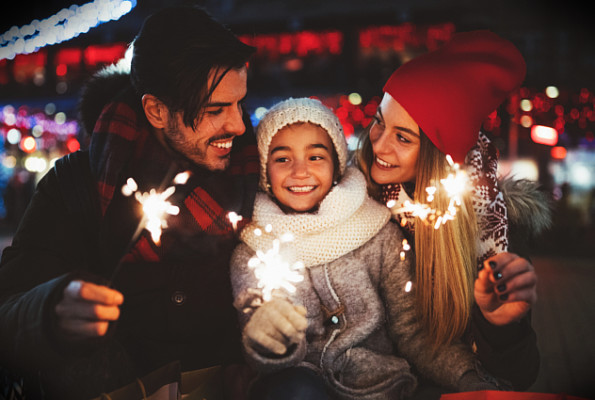 It’s a magic night, full of festivities and usually… noisy. What’s more, it comes just after Christmas. It’s the night of 31 December when – almost everywhere in the world – people celebrate the end of one calendar year and the beginning of another.

New Year’s Eve is a major event for many people, because celebrating something new is always liberating and cathartic. Parents of very young children, however, have to take their needs into account and strike a balance between their own justified right to celebrate and their children’s needs.

The basic rules for children’s sleep

Plenty of sleep at set times. These are the most important rules for children’s sleep. Finding a solution that fits in with the endless night of 31 December is not easy, but possible.
Firstly, a small deviation from wake-up times can be granted; a few days before 31 December it is wise to gradually “move forward” the children’s wake-up time, without exaggerating though, no more than 2 hours. If they are allowed to stay up after midnight, it’s still important that they don’t go on until dawn; although it might be hard, on 1 January it’s important that the alarm clock goes off at the same time as on 31 December. From 2 January onwards, change again to allow the children to revert back to their usual school wake-up times.

New Year Celebrations: what should you do if the kids are tired?

If a child starts yawning at 9 during an evening that has been specially organised for adults, it is more a sign of boredom than tiredness. The more they yawn, however, the sooner tiredness will set in and if the child doesn’t go to sleep, sooner or later he/she will become irritable.
To avoid this from happening, it is wise to plan well ahead and decide on spaces and company for the very young; if they can spend the time with a friend or two, the time will pass quickly and cheerfully 😉
If the celebrations take place at the house of friends, if the conditions and the friendship allow, it may be possible to agree on all the children sleeping together, allowing the adults free to continue the party. In this case, don’t forget their pyjamas, and if the children are very small, their favourite teddy bear.
If you are out and about or at a public party and the children are starting to nod off, it’s wise to get ready to head for home; dancing while the children are asleep at the side of the dance floor is not a good thing and the children will never have a truly relaxing and restoring night’s sleep.

New Year Celebrations: what should you do if the kids don’t want to go to bed?

The children might be having a great time, especially if they are taken away by the music and the cheerful atmosphere. In this case, it might be a problem convincing them to go home. It should be remembered that dancing, partying and in general having a good time is equally cathartic for adults and children, so it might happen that the new John Travoltas and Olivia Newton Johns suddenly nod off, unable to keep their eyes open. If possible, avoid reaching this point and take control of the situation, by dealing intelligently with the protests of the young dancers. A good night’s sleep is better than an extra dance!

If you expect to sleep away from home, the best thing is to take a small oasis of relaxation of your very own with you: the Sushi pillow by Magniflex is ergonomic, resistant and… portable!