But… do ants sleep? 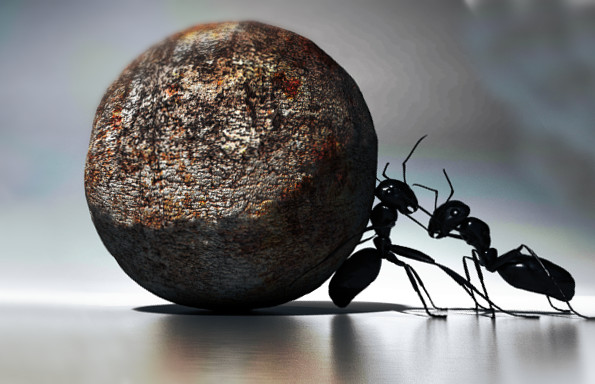 Most of them work (after all, it’s no coincidence that ants are commonly referred to as “workers”) and cannot sleep for more than five hours a day. A small minority of ants rules the the other ants (the so-called “queen” ants) and has the luxury of sleeping as much as 9 hours a day. In some respect, the world of ants is no different from the way human society is organized, where the hectic pace of life (and our everyday job) increasingly limits the amount of time we can dedicate to sleeping, if we exclude the fortunate few who can enjoy naps any time they wish. And just like with humans, the lack of sleep shortens an ant’s span of life. In fact, queen ants live longer, whereas worker ants live for no more than a few months.

A recent study sheds a new light on the way ants sleep, showing that worker ants sleep as often as 250 times a day, in cycles of no more than 1 minute long, whereas queen ants sleep more than 90 times a day in “extra-long” cycles of at least 6 minutes. Worker ants are sterile and their mission in life is solely to serve the queen ant. When they’re not sleeping, they are hyper-vigilant and always busy with some task. Male ants, instead, form the reproductive class of ants, together with the queen ant, and therefore are not part of the “caste” of worker ants.

Ants mainly communicate through pheromones, which are captured by their antenna and which regulate their interactions and behavior, both individually and as a group.

Based on the study’s observations, at least 80% of worker ants in an anthill are awake and on alert around the clock, so that they are ready to serve when needed and to make sure that the ants’ living quarters are under constant surveillance. An ant that is sleeping is noticeable because it is dead still and its antennas don’t move. Queen ants, instead, which tend to synchronize their sleep-wake pattern, would seem to have the luxury of sleeping longer (with their antennas raised at mid-height and their mouths slightly open) and may even have dreams (the REM phases were observed in queen ants, during which their antennas moved in a way that is similar to the human eyelid’s movement during REM sleep).