Back when people used to sleep with a bonnet… 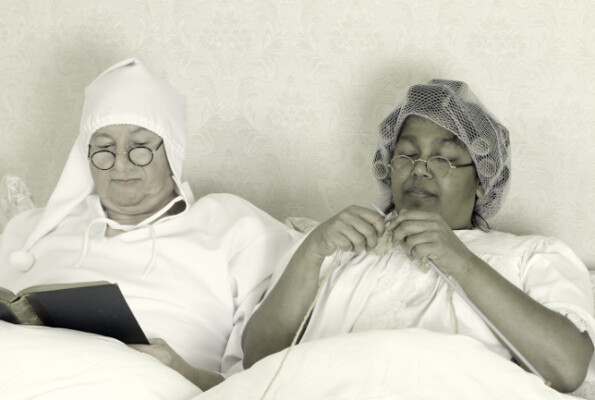 No clothing, no sheets, in big and crowded beds. Wearing a head covering for the night. That’s what sleeping was like in the Middle Ages. We’re obviously referring to those who actually had a bed or, in other words, the wealthy, rich lords and the nobility. For others, well…a cold hard “tabletop” was the most they could afford.

The bed in the Middle Ages: high, wide and short

While the typical height of an adult in the Middle Ages was shorter than the average height of the modern man, it is not enough to justify the size of beds a few centuries ago, as they definitely were short. The reason for this “limited expansion” is primarily due to the custom of sleeping in a semi-seated position, resting the head and shoulders on what were once called – and by no coincidence – “headboards” or “backrests”. What the room lacked in length it made up for in width (there are records of beds measuring more than 3 meters wide), in order to accommodate spouses, sons and daughters, servants and – on occasion – even guests. The custom of making tall beds demanded the use of an accessory reserved for climbing on and off, a sort of stool that served as a ladder.

Bed sheets in the Middle Ages: essential and functional

Apart from the decorations, which were often quite valuable, the key concept for bed linen in the Middle Ages was handiness: sheets that would replace the pajamas and furs to mitigate the cold at night. The adorned covers, instead, were more tied in with the decor of the unoccupied bed rather than the need to cover oneself. A whole other special set of bed sheets, instead, was reserved to the side coverings of canopy beds. In this case, drapes and curtains were used, which at times were even made of precious fabrics.

Sleeping in the Middle Ages: the bonnet

People in the Middle Ages slept naked, with only one mandatory clothing item: a sort of headband which, much like a meager linen “infula” (a woollen fillet worn on the forehead by the women of the poorer social classes), would adorn the head of the rich and provided protection against lice.

How to sanitize the bedroom, bed, and pillows
Friday 5 June 2020