ASMR: chills down your spine! 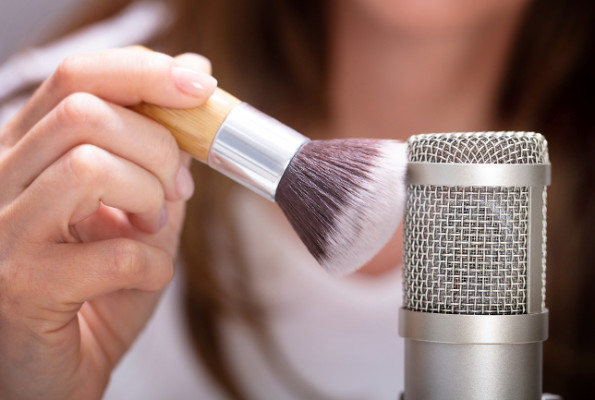 ASRM, which stands for Autonomous Sensory Meridian Response, has been quite the fad in recent years and perhaps is worth discovering for enthusiasts of relaxation like SlowSleep readers are.

ASMR is that thrilling sensation we feel down our back or scalp when someone whispers in our ear, when we taste a new dish, or when someone caresses us. The tingle that comes after this sensation acts like an irresistible electric shock. The result is a deep state of mental and physical relaxation and a sense of lightness in our muscles.

ASMR became a popular term after having been introduced for the first time (about ten years ago) by Jennifer Allen, thanks to YouTube. In fact, the trend of recording whispering voices, soft-spoken speech, the sound of tapping fingers, combs brushing, or objects being rubbed against hi-fi microphones soon spread on the social network for video content. Many people believe that these sounds have an extraordinary effect on sleep problems. To fall asleep with an ASMR video playing in the background, all you need to do is start the video, close your eyes and…slowly fall into a deep sleep in a way that is natural and unavoidable.
We all need to sleep and this need has helped to turn some expert youtubers into online stars, organizing “sessions” to induce relaxation that have attracted millions of views.

ASMR: a world of “macro-sounds” that borders on pure sensuality

There’s no denying that a persuasive voice whispering something in our ear is undoubtedly sexy, as is listening to a person breathe. The imaginary line between sensory and sensual stimulation is rather thin and vague, a factor that certainly has contributed to the success of ASMR on the internet. The sound of “voices” that come to us while glancing at the outfit of a playboy bunny does nothing but confirm that. In this case too, when we find something sexy, it’s easy for it to turn into an odd fetish, so that we find ASMR videos that capture the sound of mouths eating objects like hair combs (sure, edible ones, but which make for an unusual snack)…

ASMR: all kinds of sounds

ASMR is also a way to rediscover the world of sounds that surrounds us, and nothing captures it better than a professional microphone recording and reproducing just that one sound without the distraction of any other. The pure sound of a hand leafing through the pages of an old book opens a world of sensory perception which, because it is not disturbed by other sources of stimulation, has the effect of quieting the mind and of inducing a deep sense of relaxation.

Scents, images, flavors…Any sensory perception can become what is referred to as the “trigger”, i.e. that thing that evokes an autonomous sensory meridian response, which is a real thing but which science still knows little about. The fruits we suggest trying to trigger ASMR are the passion fruit, sour cherries, wild strawberries, or lemons. Or you could try caressing materials like velvet, raw cardboard, or the teeth of a hairbrush. Looking at each other in the eyes, observing a hand moving gently and very slowly are also a good source of stimulation to trigger the euphoric tingling of ASMR, just like the scent of an apricot seed or neroli oil. Having someone with delicate hands and fingernails massage our scalp almost automatically triggers an ASMR.
If on one hand, as we’ve mentioned, science is just starting to study ASMR, one of the most accredited theories is that what triggers the “tingling” is a mix between a physical stimulation and memory (or better, a stimulation that brings ups a memory that the body takes with ASMR reaction).

Would you like to experience ASMR without having to use Youtube? No problem!
The ASMR Spa in San Francisco works on demand and, after the success of Tingles, new ASMR apps are becoming available with every new day.