A 5th to fall asleep: if you own a musical instrument, try this simple exercise before you close your eyes at night 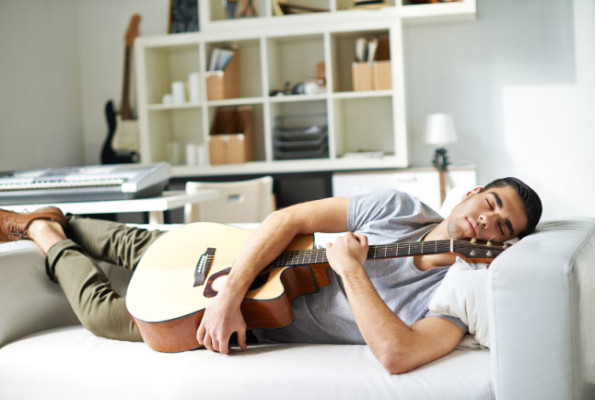 If you own a drum kit, a percussion set or a trombone,  maybe this post isn’t quite for you, but if you own a guitar, a small xylophone or a musical keyboard, well then it may help to improve your sleep at night!

Every kind of music that is based on fast-paced rhythm sections, heavy metal sounds or eerie harmonies should be banned from the bedroom, or at least it should be if your goal is to sleep peacefully. The heart tends to synchronize with the music’s rhythm, which is why a sped-up tune will stimulate movement rather than induce relaxation and will kick you out of drowsiness. High-pitched frequencies and dissonances irritate the brain, which needs to relax from time to time. Eerie harmonies and melodies have the same effect, which induce a state of fear and are not helpful when the aim is to fall asleep. Music with a rhythm higher than 60 bpm should be removed from our playlist but be careful also not to listen to songs with less than 40 beats per minute because they may make you sad and gloomy rather than make you feel relaxed. No hard rock, violins or horror film soundtracks either.

Music is an incredibly powerful driver of emotions: music moves us, and makes us rejoice, sad, exuberant… All these emotional states are triggered at a body level, because music changes our respiratory rate, heartbeat, gland activity and skin conductance. In fact, before the brain is involved, it is the body that first reacts to music. After the sequence of physiological reactions that are triggered when listening to a song, the mind starts to experience things or revisit moments from the past, which then adds depth to the “musical experience”, leading even to changes in our posture or tone of voice.

As we were saying in the beginning, if you own a guitar or an instrument that can be played without making too much noise, you can induce your mind into a state of quietness and clarity by taking advantage of the musical interval that is the 5th. The so-called “fifth” is, in other words, the interval from the first to the last of five consecutive notes on a diatonic scale. Technically speaking, if a C is produced by a frequency of 220 Hz (220 oscillations per second), its fifth, the G will vibrate at 330 Hz. To obtain the interval or fifth, there needs to be a ratio of 3:2 between one note and the other, or seven semitones.

Every musical interval has a psychological effect: some are disturbing, others inspire joy. The fifth interval is linked to stability, positivity, openness. It’s an interval that creates harmony, perfection. The musical fifth restores balance and is therefore just what one needs to let go and be lulled to sleep.

Experts like Fabien Maman suggest playing the sequence F – C – G- D – A – E to obtain the most from the musical 5th. The advice is to play the sequence calmly and repetitiously for a few minutes, focusing exclusively on the goal of falling asleep. For those of us who aren’t very skilled at playing an instrument but can nonetheless play a few notes, narrow down the sequence to repeated Cs and Gs, perhaps hitting on keys or strumming chords that produce lower frequencies. For the interval to have its effect, the notes can be played together or one after the other in sequence, not too far apart, so that the persistence of the note you just played is still audible when you play the next one.

Playing the 5th interval to sleep better: a small secret

Whether it’s a guitar, a xylophone or a keyboard, what matters is that when you’re done playing your instrument, you place it back in its case or unplug it from the socket. If this forces us to get out of bed, on the other hand, it soothes the mind, because we close our eyes without feeling like we left some work unfinished.